Methods and strategies of teaching technique to children and juniors have been the subject of a variety of discussions for a number of years. Despite these discussions among coaches and instructors all over the world, there are still very few children and even junior racers who possess the technical skills at the level of adult World Cup racers. I think that this is a major issue because the real future of ski racing belongs to these very boys and girls.

I would take the liberty to say that all of these previous discussions of teaching children and juniors are almost pointless. The reality of developing ski racers is simple – if a 12-13 year old racer employs a fundamentally incorrect technique, which is often the case, the probability of this racer using the same flawed technical movements at the age of 16-17 is very high. In other words, this junior racer will ski faster, but essentially the same in terms of technical fundamentals and overall biomechanical movement patterns.

Right at the FIS coming of age (16-17) very many junior racers experience obvious stagnation in their development and leave competitive skiing. I believe that the main cause of losing a lion’s share of junior racers at this age lays in unsound technical fundamentals instilled at the ages from 10 to 13. If the technique of young skiers at this age has fundamental flaws, it simply does not work well at a higher level of ski racing. Therefore, coaches working with junior racers have to develop a proper technique so that a racer’s technique does not limit their progress at all stages of development up to the FIS level and ultimately the World Cup. This is a very important aspect of coaches’ work that is equally significant in North America as well as in Europe (where a stream of talented young racers begins to diminish).

In this article I would like to use two examples of junior racers – 12 year old Angraz Pogladich from Slovenia and a 13 year old Katia Tkachenko from Russia. Both of these racers got my attention not only by their outstanding race results, but by very mature adult-like technique demonstrated on a consistent basis. Both of these skiers received highest scores in technical contests in Austria and Slovenia, where judges, who are coaches do not judge the speed in the course. Instead, a racer’s free skiing technique in various terrain and snow conditions is put to the test. These tests have proven time and again that at the ages 10-13 the consistently executed correct technique is the most important factor for future development.

Yet, many coaches still do no pay enough attention to free skiing in all types of conditions. Developing consistent well balanced movements in various skiing situations plays the most important role at this age. This is particularly true, if we are genuinely looking to a young athlete’s future and not simply to immediate results in the next race or the current season.

I would like to start from photo sequences of Katia taken when she was still under the age of 12. In this sequence Katia demonstrates a GS turn outside the gates:

She demonstrates a generally correct movement pattern in the turn. A zero phase (with both legs bent between the arcs) can be clearly seen. Also, the extension of the outside leg and the flexion of the inside leg are quite evident. Katia, obviously, knows how to re-center in-between the turns, since she is able to engage the tip of a fairly long ski from the top of the arc.

It is clear from this example that the young racers may not be quite ready for a more pronounced extension and movement inside the arc of a turn. However, an overall movement pattern is correct, which can be a foundation for a future development that is evident in the video clips below.

The same can be said about next two sequences depicting turns executed on slalom skis. A zero-phase and re-centering are clearly seen here. 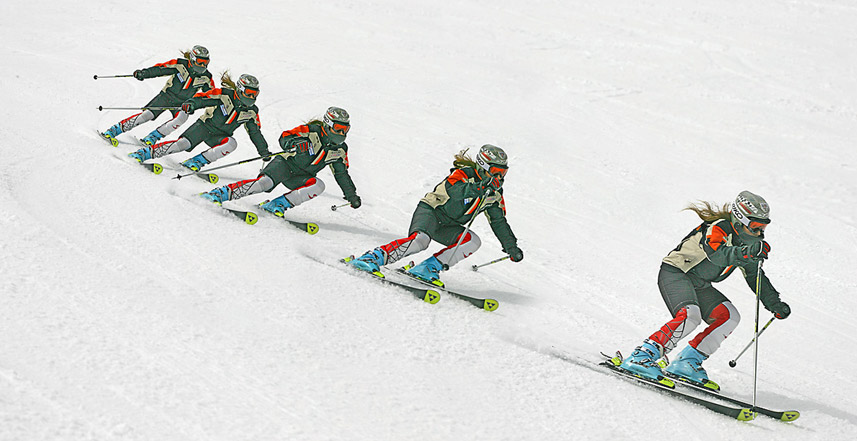 However, it is also evident that this young racer is not yet capable of more displacement inside the arc of a turn. Katia keeps her skis a little too wide and the inside ski almost always remains under her center of mass. In other words, the racer still needs some support from the inside ski. The same tendency is seen in the following sequence taken in a GS course: 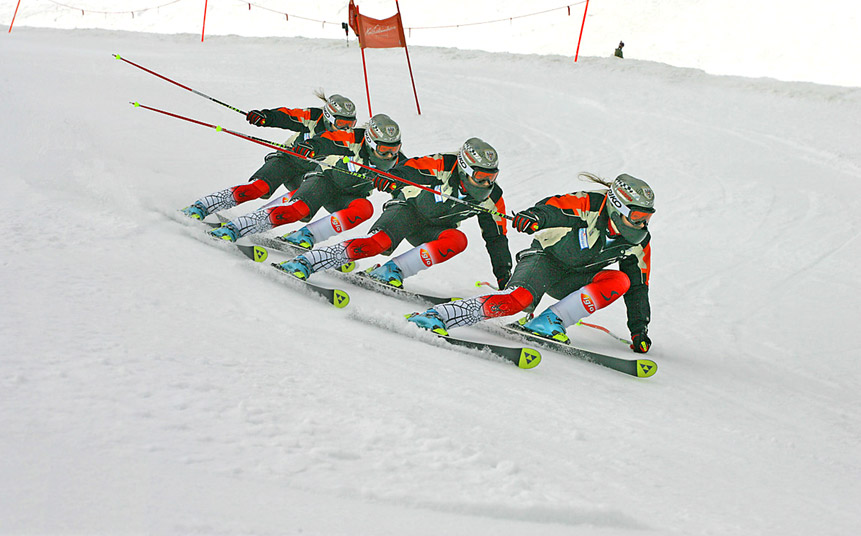 Katia here demonstrates more obvious movement to the inside of the turns. Both skis are working: the outside leg is extended and the inside one is flexed. However, the inside hip barely crosses the imaginary line rising from the inside boot. At this stage of development this is not a problem, considering that the overall movement pattern starting from the zero-phase (the transition) and re-centering is correct.

The above mentioned tendencies, exhibited at age 12, are clearly seen in the slalom turns shown in the following video:

I guess that wide track of the skis and reliance on the inside ski for support are quite evident here. However, the young racer and her coach needed only one year to make her slalom turns look like these ones:

I believe that very sound progress in her skiing is obvious at the age of 13. The movements inside the turn and an overall dynamic have increased. At this point it became apparent that skiing at such level no longer requires junior but much stiffer boots. When Katia put on these new boots (without any boot fitting and alignment done yet), she immediately was able to ski like this:

Undoubtedly, this is an example of very mature skiing. The racer performs rhythmical slalom turns at a decent speed on an uneven slope in varying snow conditions. Yet, Katia is able to maintain consistent rhythm and turn shape. She exhibits a very advanced level of consistent and balanced technique that can be better seen in slow motion:

Flexion and re-centering between the arcs is very apparent. Katia demonstrates very consistent extension of the outside leg and engagement of the tip of the ski on top of the arc. The skier’s torso remains almost motionless. It is an almost excellent demonstration of slalom turns, regardless of the age of the skier. It is worth mentioning that all of the elements required for this kind of skiing were clearly present in Katia’s technical arsenal at the ages of 11 and 12. Some mileage, including more work on balance and movement inside the arc, was needed for achieving this level of skiing in slalom.

Similar level of balanced technique is demonstrated by Angraz Pogladich, a 12 year old Slovenian boy video taped here while negotiating an upper section of the GS course at the Whistler Cup:

Angraz also demonstrates very good flexion in zero-phase, as well as re-centering and extending inside the arc on top of each turn. It can be clearly seen from the video shot from the back:

Thus, at the age of 12, this boy consistently executes technical elements that are not always properly executed by adult racers in a GS course. All Angraz really needs is to grow up and get physically stronger. If the approach taken by the coaches is correct, the young racer should not loose his technique, but, in fact, the range of consistent application of this technique should be significantly broader by the time he reaches the age of 18-20. In other words, by this time the racer should be able to demonstrate the same technique under more difficult conditions – on much steeper slopes and on much harder injected surfaces. This sort of future can be an absolutely realistic and attainable goal, if by the age of 12-13, the technical fundamentals are acquired by the young racer. If the fundamentals are not really there, I would refrain from discussing any long-term plans and competitive goals.

A very mature GS technique is also demonstrated by Katia in free skiing on GS skis:

Note that Katia is not skiing here on an ideally groomed slope. Such stable and fast skiing on an uneven snow surface requires very high level of balance. It can be seen more clearly from the slow motion video:

Here we can clearly see very pronounced flexion and extension in a first phase of a turn. It is particularly well demonstrated in the left hand turns (executed on the right ski). Partly this is an effect created by the video angle and partly it is caused by alignment issues of the left boot, which was corrected later with the new boots. I suppose, it is obvious that the foundation of such a mature skiing is visible in a vey first sequence at the beginning of this article, where Katia executes a GS turn at the age of 11.

In conclusion, I would like to reiterate that at the ages of 10 to 14, race results are absolutely irrelevant. Technique is far more important at this age. Technique can either help racers to go over the barrier of a so-called difficult age (i.e., FIS age of 16-17) or will force racers out of the competitive sport. The foundations of the proper technique have to be developed by 13-14. After that, typically, there are simply a lot less chances for correcting racer’s the technique, because the following years are used for quality mileage directed to broadening the range of application of the already developed technique. Technical work, obviously, does not stop at all ages and at various stages of development. Such work, however, can have (and often does have) absolutely no effect without technical fundamentals instilled at an early age.

Therefore, the technique at the children’s level is no less important than the technique at the World Cup level. Consequently, a good children’s and juniors’ coach should be valued the same or even more than a National Team coach. I hope it will be the case one day. For now, I just hope that this material will be useful for parents and coaches.