General guidelines (apply to all kinds of turns, from slalom to downhill): 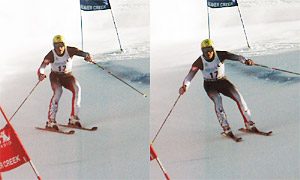 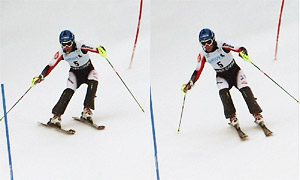 During the unloading phase in transition, the upper body remains in neutral position, while skis, legs and knees cross under the body into a new turn in pendulum-like motion. 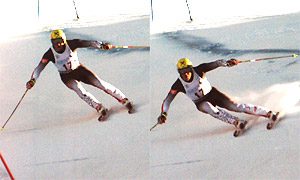 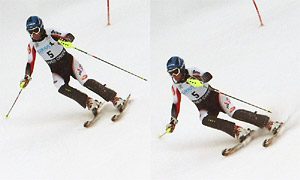 During the initiation stage pressure is building up mostly on the outside ski. Inside ski is also used troughout the turn and carries some weight. 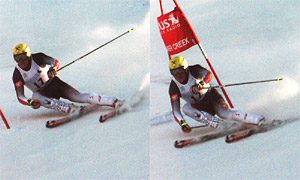 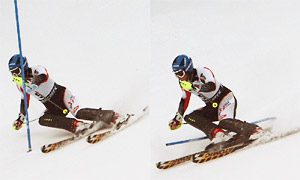 Upon entering the fall-line, pressure increases slightly (basic stance should stay the same or slightly more extended/stretched). Getting too far back should be avoided. 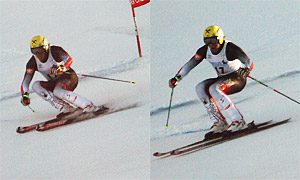 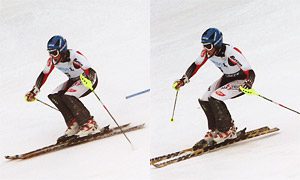 Exit out of the fall line and un-weighting of the skis are performed by a fluid transition from the outside ski onto the inside ski (the new outside ski).

Common Mistakes and Their Correction

Problem: Initiation of a turn without enough commitment to the outside ski

Keep a good mix of drills. It is always recommended to do some free skiing in between the sessions as well as doing free skiing drills.

Problem: Skis are too close together

Problem: Leaning in too much

Problem: Leaning too far back or too far forward

Problem: Taking too straight of a line in the course

Problem: Not enough pressure in the fall line

Problem: Set-up phase of the turn is too short (trajectory is not «round» enough)

Set a simple course setting with turn-helper gates, emphasize active stretching (extension). Could be practiced in the rolling terrain (bend knees on top of the roll, actively stretch in the valley in between the rolls).

Editor’s Note: In the above images, at first glance one may get an impression that both racers appear to exhibit a significant «tip lead» (the inside ski is significantly ahead of the outside ski), especially in phases 2 and 3. We would like to emphasize that athletes DO NOT intentionally push the inside ski forward or counter-rotate the pelvis to achieve this ski alignment. Instead, tip lead develops naturally, due to extremely high edge angles developed by these top racers. Such extreme edge angles require rather large lateral separation between inside and outside feet, which in turn causes longtitudional separation of the skis (as a result of a simple anatomical fact that human knee articulates forward. Grasshoppers, for example, would exhibit a negative tip lead). Note, that as soon as the egde angle is reduced (phase 4-1), tip lead disappears, because racer’s pelvis stays «square» to the skis throughout the turn (i.e. an imaginary line drawn trough hip sockets is always perpendicular to the longtitudional axis of skis). What looks like «counter-rotation» in the first Raich’s photo, during the transition phase, is, in fact, an anticipatory projection of the upper body into the new turn, which happens ABOVE the pelvic girdle, in the abdominal area. This type of movement is most often seen in slalom (in steep, tight sections), seldom in GS, and virtually non-existent in superG and downhill